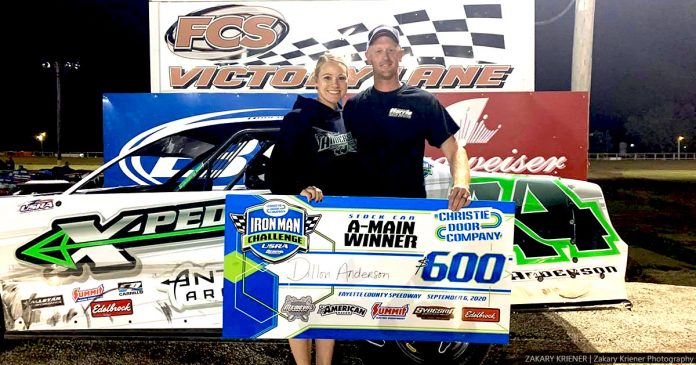 WEST UNION, Iowa — Dillon Anderson, Josh Roney and Chris Hovden were the first to reach the finish line in their respective features Sunday when the Christie Door Company Iron Man Challenge built by Medieval Chassis invaded the Fayette County Speedway. The win was worth $600 to Anderson and was his fifth of the 2020 season. Hovden, meanwhile, fell short of notching his 14th win of the year and finished second to his fellow Decorah driver while Iron Man points leader Pat Graham of Ankeny took third. Dan Hovden of Decorah started 10th and, like his brother in the Stock Cars, came up one spot short of taking the win. Chris Hovden of Cresco claimed his 14th win of the season in the Mensink Racing Products USRA Hobby Stock 20-lapper with Waterloo’s Justin Lichty taking the checkered flag a distant second.