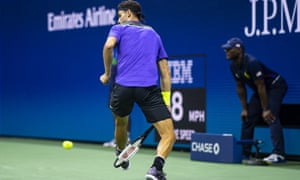 Trick shots at the US Open, crafty F1 overtakes and sports stars on holiday

Last modified on Thu 27 Aug 2020 15.06 BST. Laugh all you like, but the Addicks have signed a former Ballon d’Or winner from Barcelona before. Here’s Match of the Day’s feature on Allan Simonsen’s Charlton debut following his shock move in 1983. And Bianca Andreescu’s epic two-week journey to becoming the first ever slam winner born this century. The last time Arsenal and Liverpool contested the fixtures was back in 2002 – peak Wenger-era – when Gilberto scored a lovely winner.