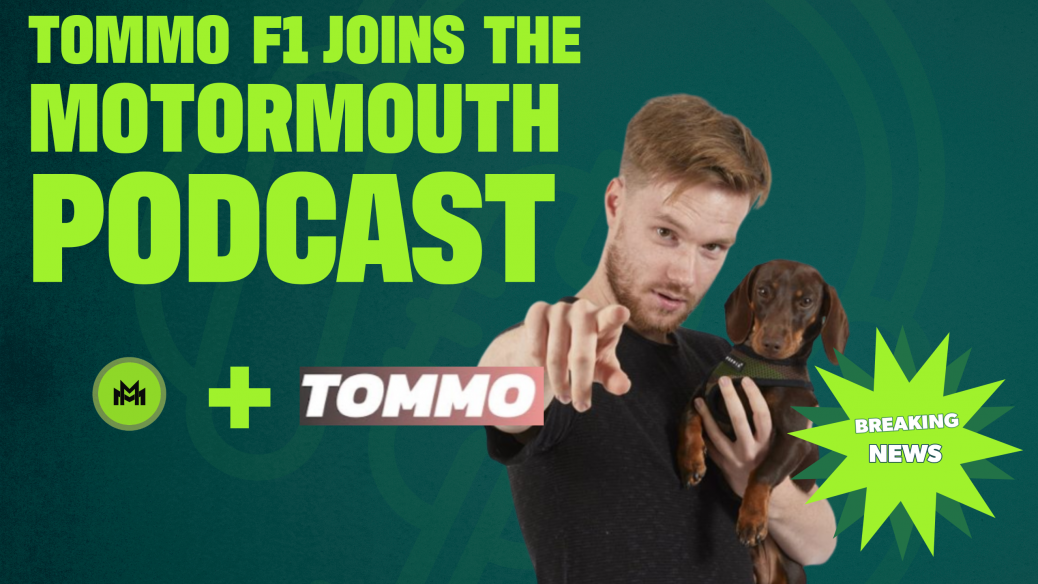 Tom McCluskey on all things F1 and joining the Motormouth Podcast

With Harry working across Formula 1, Formula 3 and MotoGP for a while, Tom McCluskey, probably best known as TommoF1, is joining Tim on the Motormouth Podcast. We spoke to Tom about his rise through the motorsport industry as a content creator and what he’s going to bring to Motormouth over the coming months.

Tom started out on YouTube creating football content, whilst Formula 1 was more of a hobby on the side. In the middle of 2019, Tom moved away from football and decided to delve a little deeper into the content creation side of F1, a sport he’s loved since he was young, but only began to follow more keenly in 2017.

“I feel like I talk about the sport in a way that typically it hasn’t been spoken about, with a more relaxed, casual, less intimidating approach to it,” Tom says. “It is a difficult sport to wrap your head around – there’s a lot to it – but I try to talk about it like how I would talk about it with my mates at the pub.

“Formula 1 is a sport where the more you learn and ingrain yourself into it, the more it gives back to you.”

Tom’s passion for motorsport didn’t come from his family or close friends. Instead, he found motorsport himself, always being fascinated by cars from a young age. He believes that, because he found F1 himself, that’s why he always came back to it.

“It’s quite unusual that I wasn’t exposed to it through other people,” he says. “I’ve got no idea when I watched my first F1 race because I would’ve been a little kid and it would’ve just been on telly.”

Tom’s earliest memories of F1 are from the Hakkinen West McLaren era from the late 1990s and early 2000s.

Although his younger years and watching motorsport are blurry in Tom’s mind, the fact that he’s come back to it and is now fully immersed in it just reinforces to him that it’s something he does genuinely love.

Being introduced to motorsport at a young age left Tom dreaming to make it as a racing driver one day. However, entering the sport through karting is an expensive commitment. Working elsewhere in motorsport was never something he considered, but after finding an advertisement for a Motorsport Engineering college course in East London, Tom decided that would be the pathway he would take post-GCSEs.

“All my mates went to sixth form and were all together and I just went off on my own and did this motorsport engineering course,” he says. “However, I realised quite quickly that side of it wasn’t really for me.

At university, Tom studied a Product Design course which was part design, part engineering and manufacturing. Although he tried both, he followed the graphic design route, which was where he ended up after graduating. He got into photography and video editing – basically content creation but from a production standpoint – and he found his way back to motorsport through that.

“I was able to use those skills that I’d cultivated – design, thumbnail editing, photography and production overall – and decided to give F1 content a go instead of football.”

The idea of being a YouTuber and doing YouTube full time as a career until retirement is new, and not something we’ve seen pan out yet, but Tom doesn’t see any reason as to why he can’t continue producing Formula 1 content in his own way, whether that be on or off camera.

With different content and broadcast outlets in the motorsport sphere often looking to expand, Tom wants to continue working on his channels himself.

“I’d be up for getting an editor to help make things a bit more streamline and take things off my shoulders so I can put some time into other things on the side and other projects, but right now, I’m very content working for myself.”

After university, Tom worked in ‘traditional’ jobs for six years. He’s happy with what he’s done in those areas, but he’s certainly happier with the freedom and flexibility he has now. It’s all about taking each day as it comes for Tom.

“If opportunities come up, make decisions on how you feel at the time and what you think is right,” he says. “If it’s good, great. If it’s not so good, learn from it and move on.”

Although on hiatus at the moment, Tom also hosts The Cool Down Podcast on YouTube and he’s spoken to a variety of people in the motorsport industry, from Motorsport Network’s Director of Digital Strategy Jess McFadyen, to popular motorsport photographer Kym Illman.

An iconic moment on The Cool Down Podcast for Tom was speaking to ex-F1 driver Johnny Herbert, who grew up 15 minutes from Tom’s mum’s house. Although Tom’s not old enough to remember Johnny’s career, he does remember his dad telling him about how Johnny grew up not too far away.

“He was the one kind of name in my mind and if he could do it [become a racing driver], maybe I could,” Tom says. “Obviously, it never materialised.

“He’s someone you see on the telly and I’m just talking to him about where he used to do his paper round and the Tesco that used to be a cinema. When you’ve got that connection in someway to something that’s different and outside of motorsport, you kind of get a bit more out of people.”

Tom first met Tim and Harry at the Motormouth charity karting event last year and recently featured on the podcast as a guest. Shortly after that, Tom received a message explaining that Harry would be away from the podcast for a period of time and was asked if he would be interested in jumping into his seat for a while.

“When you’re talking to someone, it’s not what you ask, it’s how you ask it,” Tom says. “The best podcasts, especially when it’s three or more people, are the ones where it doesn’t feel like an interview; it just feels like a conversation between a bunch of people and there’s not really a host and a guest.

“Motormouth is quite chilled and it’s a good open conversation, which is exactly what I go for with my stuff.”

It’s important for Tom to highlight in his podcasts and other interviews that whoever he’s speaking to is a person too, even if they are a high-brow athlete, like a Formula 1 driver. Talking about normal issues and problems like mental health and how they’ve been dealing with COVID and travelling are all topics that are relatable for listeners.

“They’re the questions I’d want to hear answers to and I’d be interested in hearing answers about by just trying to get the real side out of these people that are so often put on a pedestal as people who are celebrities, or athletes,” Tom says. “Showcasing them as normal people is not a bad thing, only a good thing in every way as far as I’m concerned.

“Being able to get that connection is hopefully what I will bring to the Motormouth Podcast.”