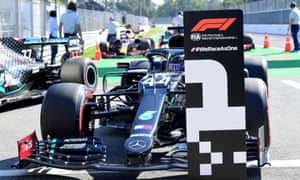 Last modified on Sun 6 Sep 2020 19.14 BST. Charles Leclerc was in 13th, making it the first time since 1984 that Ferrari have not had a car in the top 10 in qualifying for the Italian Grand Prix. This weekend is the first meeting where the teams have been banned from using qualifying modes for their engine. The ability of Mercedes to turn their engine up during qualifying has been referred to as “party mode”, although all teams have used enhanced engine modes in qualifying. “I don’t even think we ever had a party mode,” he said, wryly. There was no smiling at Ferrari and just scoring points might be accepted by the team who were struggling like never before at Monza.