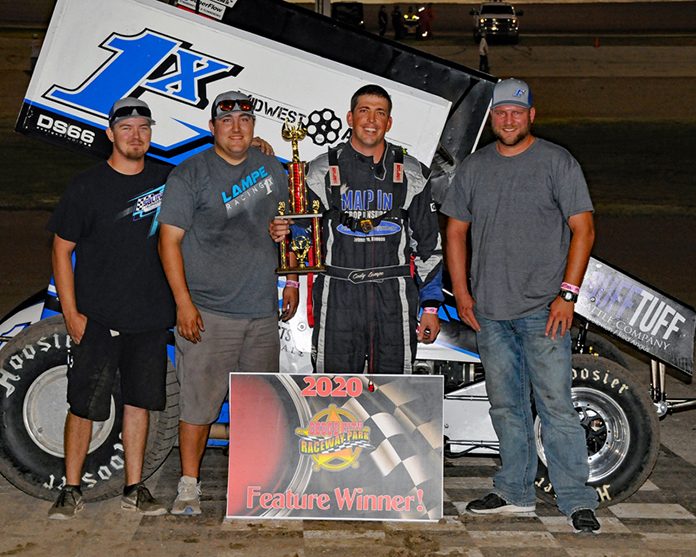 DODGE CITY, Kan. – It was a night of first-timers as three different drivers made their way to Dodge City Raceway Park victory lane in Saturday’s Labor Day Weekend Spectacular opener atop the three-eighths-mile clay oval in southwest Kansas. Cody Lampe scored his first sprint car victory with Kyle Wiens and Ondre Rexford also bagging first career DCRP wins in IMCA Sport Modifieds and IMCA Stock Cars, respectively, with Nick Link capturing his first IMCA Modified win of the year and Trevor Schmidt taking his second IMCA Hobby stock win of the season. In the next feature out, Montezuma’s Ondre Rexford survived a late skirmish for the lead to pick up his first DCRP feature win the 15-lap IMCA Stock Car main event. Rexford navigated the final three laps to post the win ahead of Gerald Walker while Schell made his way back into the show position. Rounding out the night’s first-time DCRP winners, Newton’s Kyle Wiens fought off Brendyn Nordyke over the closing rounds of the 15-lap IMCA Sport Modified feature event. Rounding out the night’s winners, Hay’s Trevor Schmidt gunned into the lead at the outset of the 15-lap IMCA Hobby Stock feature event and held a solid advantage until a mid-race caution bunched up the field.