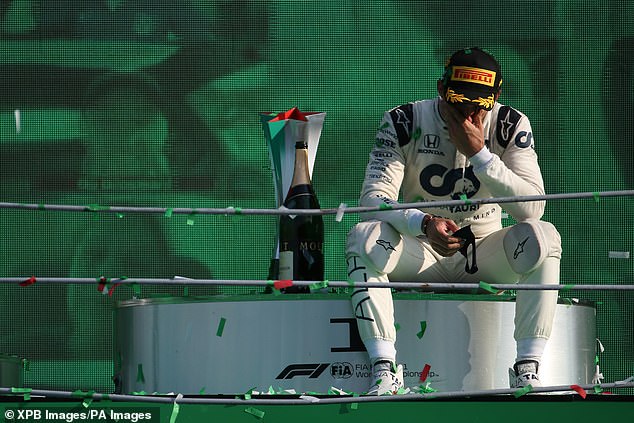 ‘It’s bulls***!’: Lewis Hamilton fumes as he finishes SEVENTH after a pit stop nightmare at Italian Grand Prix… with Pierre Gasly taking a shock win on day of huge drama and Ferrari crashes

Lewis Hamilton stomped up the stairs to demand answers from the stewards after they imposed the penalty that cost him victory at the Italian Grand Prix and handed it to the least likely candidate of recent years. Hamilton then began the standing re-start, on lap 28 of 53, leading from Stroll. Hamilton is up into the points after overtaking Raikkonen. LAP 30/53: Hamilton has it all to do and says his 23-second gap to the pack is ‘bulls***’ over the team radio. LAP 29/53: Hamilton is in the pits and is serving his stop-go penalty. Hamilton is out of his car and is taking his scooter for a ride down the pit lane. Hamilton is back in first and Sainz, who played by the rules, is down in 8th. LAP 13/53: Hamilton is still out in front and has clocked the fastest lap of 1:25.225. LAP 2/53: it’s a brilliant start for McLaren, too, with Sainz moving up to 2nd and Norris is in third.