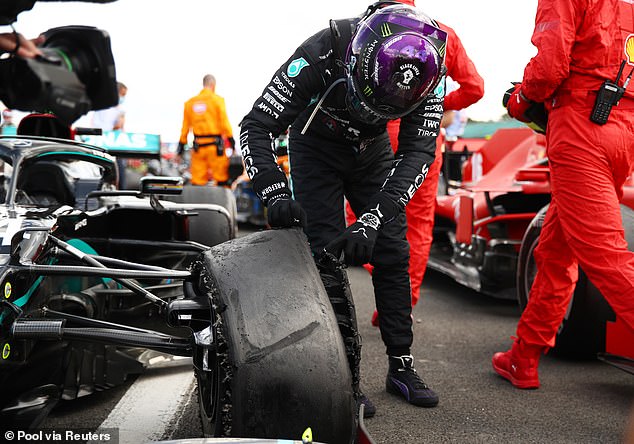 ‘I was just praying to get it round’: Lewis Hamilton describes heart-stopping final moments after grinding his car over the line to win British GP

Lewis Hamilton has described the exhilarating final moments which saw him win the British Grand Prix for a record seventh time. Hamilton checks a serious puncture after winning the race in dramatic fashion at Silverstone. Hamilton, 35, was in a two-horse race with his Mercedes team-mate Valtteri Bottas until the dramatic last two laps, and described what was running through his mind in the final moment. ‘Up until that last lap, everything was smooth sailing,’ said Hamilton following the conclusion of the race. Hamilton’s tram-mate Valtteri Bottas also suffered damage in what was a hectic afternoon. Bottas suffered a puncture and then Hamilton’s front-left tyre went on him, too.