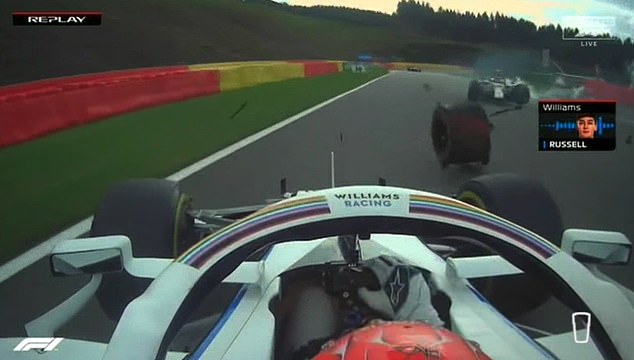 ‘F***, there was nowhere else I could go guys’: George Russell fortunate to emerge unscathed after nasty Antonio Giovinazzi crash at Spa with the Italian’s TYRE flying off and hitting his Williams rival

George Russell and Antonio Giovinazzi both came out without a scratch after a nasty crash at the Belgian Grand Prix almost saw a loose tyre strike the Brit’s car. Russell admitted to his engineers that he had ‘nowhere else to go’ as riding behind Giovinazzi he was met with a deluge of debris after the Alfa Romeo spun off into the barrier having lost grip on the Fagne chicane. George Russell had a split-second to react to avoid a loose tyre on track at the Belgian GP. Antonio Giovinazzi lost control at the Fagne chicane and caused Russell to hit the barriers. Russell came down the straight and was forced to swerve left in a bid to minimise the impact of Giovinazzi’s loose tyre. Giovinazzi lost control on the kerb of the Fagne chicane and spiralled off into the barriers. That saw Giovinazzi’s tyre dangerously fly off and in the direction of an approaching Russell.